The chameleon on the icon of the UCT Law Faculty, the statue of Alma Mater towering over UCT middle campus, represents movement and change. This theme was picked up by the recent Jubilee Conference on Legal Pluralism, held at the Kramer Law Building from 7 to 10 September 2011, under the title "Living Realities of Legal Pluralism". 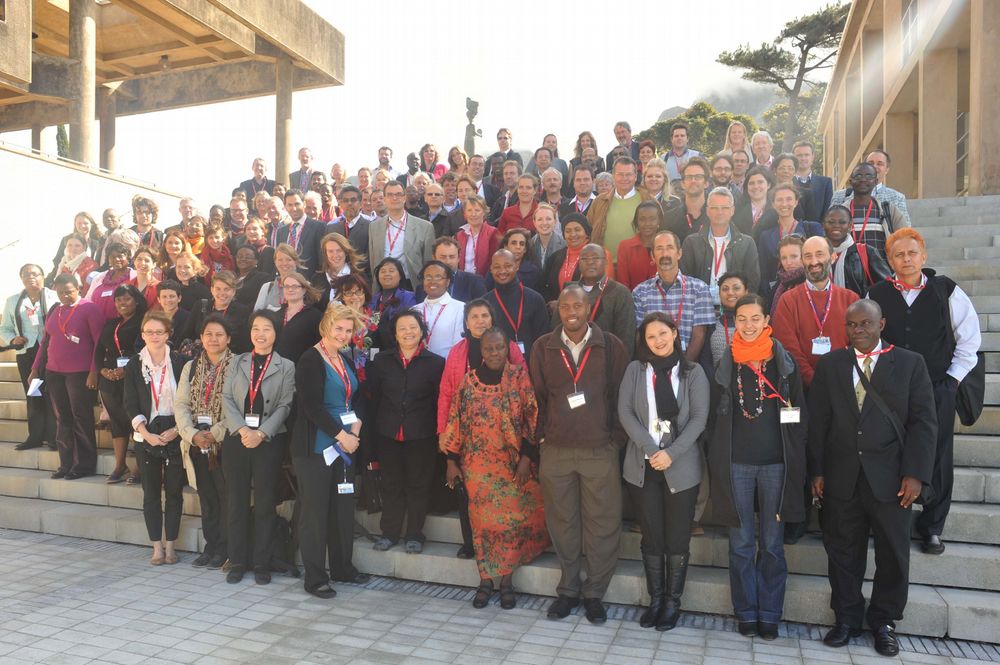 In anthropology and law it is known that "law-like phenomena", i.e. systems of rules which are not created and maintained by national states, exist and operate to determine the fate and positions of groups and individuals who are subjected to such systems. The jubilee congress brought together a range of international scholars and practitioners from many countries, in particular those from various African regions, who are grappling with the realities of plural law. It highlighted the state-of-the-art in legal pluralism studies. These included theoretical and methodological approaches to the study of legal pluralism from past to present; studies of the comprehensive regulatory activities undertaken by government, civil society, and market parties in various fields and at different scale levels, and how these are affected by legal pluralism; the pluralist discourses of rights over land and natural resources, which remain social and political contested; the effects of the increasing intertwining of human rights and development discourses on issues in legal pluralism; and the perplexing relationship between law, custom and religion as competing sources of normative reasoning and social ordering.

When the Commission on Legal Pluralism invited the Centre for Legal and Applied Research (CLEAR) at the UCT Law Faculty to host the 15th Jubilee Conference on Legal Pluralism in Cape Town, CLEAR saw it as an opportunity to further its goals of promoting excellent legal and applied research, fostering global partnerships and attracting world-class scholars to UCT. Simultaneously, it saw the chance to promote two of the new research ventures at the UCT Law Faculty, namely the National Research Foundation's SARChI Chair in Customary Law, awarded recently to Prof Chuma Himonga; and the Chair of and Centre for Comparative Law in Africa (CCLA) which is funded by the Vice-Chancellor's strategic fund. The positions of the Chair and Director in the CCLA have just recently been filled by Prof Salvatore Mancuso and Dr Ada Ordor respectively.

The Chair in Customary Law is intended to fill a void left by the marginalisation of customary law in colonial and apartheid South Africa; to address the dearth of research in customary law and to increase the understanding of this legal field as a dynamic system of rules, as well as its actual workings within modern constitutional frameworks. Prof Himonga explains that the Chair's research encompasses both customary law existing within the South African legal system as well as "non-official" customary law operating outside it, in our society. She said that this focus is critically important at the current point in South African legal development, to help identify and enforce the "living" customary law under which many South Africans operate.

The Centre for Comparative Law in Africa is tasked to inspire, motivate and foster original comparative research about legal issues from distinctly African perspectives. This is an important task, as the employment of comparative methodology in building of legal argument is currently still largely centred on Western concepts and approaches, with outcomes such as the harmonisation of EU law. In existing legal comparative theory, the role of African laws is barely ever mentioned, whilst specific comparisons, if they involve African jurisdictions, place these jurisdictions in the position of the recipients of knowledge, rather than the producers thereof. Prof Hanri Mostert, Research Director at the UCT Law Faculty explains that the vision for the CCLA is that it will work towards reversing this trend and towards "finding new and different linkages to further the comparative methodological approach." In doing so, it is envisaged that the CCLA will work closely with the NRF Chair in African Customary Law, devising African approaches to established comparative and socio-legal methodologies.

The jubilee conference brought together these goals and ventures in a massive collaborative effort involving about 160 speakers. Over the course of three days, five conference themes (models and practices of legal pluralism, governance and the politics of order, property relations, human rights and development and law, custom and religion) were explored in four plenary sessions and fifty panels boasting the best of African and international scholarship. A particular effort was made to include avant-garde approaches and fresh perspectives from bold new voices. To this end, sponsorships from UCT, Oxford University Press, LexisNexis, JutaLaw, the Netherlands Organisation for Scientific Research and the International Alliance on Land Tenure and Administration (supported by the Centre for Law and Governance at the University of Groningen) were employed to enable participation by students and young scholars, African delegates, and contributors on specific themes and panels.

Both Dr Maarten Bavinck, current Chair of the Commission on Legal Pluralism, and Prof Mostert agreed that the conference achieved its goals and that it was a huge success. Board Commission on Legal Pluralism